In WDM technology, each channel is transparent to the speed and type of data. Any mix of Ethernet, SAN, OTN, SONET/SDH and native video services can be transmitted simultaneously over a single fiber or fiber pair. There are two types of WDM technologies: DWDM - dense wavelength division multiplexing, and CWDM - coarse wavelength division multiplexing. Each technology has characteristics that suite different environments, networks and user requirements.

DWDM supports up to 96 wavelengths, spaced at the standard ITU grid of 50GHz, where each channel is +\-0.4nm wide. The dense division multiplexing architecture enables the fitting 96 wavelengths on a single fiber and supports long haul and metro applications with capacities of 100G/200G/400G per wavelength.

One of the biggest advantages of DWDM is the use of optical amplifiers, which can cost-effectively amplify the entire DWDM spectrum and overcome long spans of attenuations and distances. In addition, most DWDM optical transceivers support wavelength tunability, which reduces the part numbers needed and enables faster delivery time while also reducing spare parts.

OTN (optical transport network) layer over DWDM increases reach by passing through multiple amplification sites without the need for regenerators. This is thanks to forward error correction (FEC), an error-controlling mechanism in which the sender is able to add redundant data to the transmitted information, enabling the receiver to identify and correct any errors in the data. FEC boosts the performance of the optical network by a factor of at least four, and is a major feature of the OTN network. FEC is standardized by both ITU-T G.709 and ITU-T G.975 specifications.

Despite the difference in cost, the need for high speed, more capacity and longer distances has made DWDM the technology of choice for greenfield installations, for upgrading existing networks, and is compulsory for transmission of 100G and above. PacketLight solutions can pack as many as 96 wavelengths into a single fiber. When boosted by Erbium-doped-fiber amplifiers (EDFAs), the DWDM systems can support ultra-long haul applications of thousands of kilometers without the need to add costly regenerators (see Figure 1).

CWDM used to be the popular choice in low capacity, short distance and low rate (up to 10G per wavelength) applications, as well as in networks where the initial requirement does not exceed 8 wavelengths. In addition, low cost entry point and the difference in economic scale (typically a third of the cost of equivalent DWDM optics) make CWDM ideal for initial network set up. As the need for capacity grows to 10G/40G/100G and 200G, there is a rising demand to increase capacity by adding DWDM onto existing CWDM infrastructure. For more details, see DWDM over CWDM Network.

One of our experts will get back to you as soon as possible. 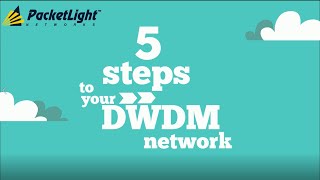